My High & the Mighty

The difference between John Wayne's "High and the Mighty" and Pat's is that John Wayne's is only a movie picture whereas Pat's is a real true story.

On the 3rd September 1959, Captain Ed Schley, Captain Hank Warton, Co-Pilot Stuart McQuilkan, two stewardesses and myself as flight engineer departed Hamburg on the Aircraft D-ABEF, a Douglas DC-4 (Skymaster, a German airline company: Continentale Luftreederei) for Frankfurt.. This type of aircraft was used in the Berlin Airlift and for United Nations in the Belgian Congo.,

The data is from Pat's log-book

The DC-4 carried a maximum of 72 passengers. We loaded 70 Amercian females, which were dependence of the military stationed in Frankfurt, included 12 babies and approximately another 25 were pregnant.

Take-off and climb, everything normal till we reached 8,000 feet. As this aircraft was not pressurized we had to be extremely careful with the passenger. Ground pressure: 14.5 P.S.I. (Pounds square inch per 1000 feet you loose 1/2 P.S.I.)

We had reached the point of return when the HF (Range 1000 nautical miles) Radio- set started smoking. I immediately disconnected the unit and told the Captain. We could not contact anybody in the middle of the Atlantic and had no other option but to continue.

We got contact with Iceland on the VHF about 100 miles out from Keflavik only to be told it was impossible to land due to crosswinds. We had no other alternative but to proceed and take our chances.

On the first approach we were completely blown off course about 300 meters from the centerline, so we had to overshoot and go around. We were thrown around the sky like a cork in the Atlantic.

The next approach the Captain put the wing into the wind and we were really flying at a very steep angle. The Captain managed to get the aircraft down on the runway but his experience was on a C46 (a Curtis Commander two-engine aircraft) which had a tail wheel. He slapped the No. 4 throttle forward, which put us off the runway. I pulled the throttle back. We felt that the gear was not on even ground, in fact it was a trench.

A brief inspection of the aircraft: No. 1 propeller had bits missing, but the second defect was more serious. The engine mount of No. 2 engine had pulled away from the bulkhead. With the help of Iceland Air we got the aircraft towed into the hanger. I was given two young technicians, Christian and Gunnar. We obtained a propeller from the US military and changed the propeller which was no great problem. We discussed what to do about the damage on No. 2 engine. They obtained a piece of commercial L-shape angle and with some big bolts pulled the engine mount back in position. Christian and Gunnar were a great support and worked long hours. Luckily no FAA around. Air Authorities would ground the aircraft until an authorized repair was carried out. 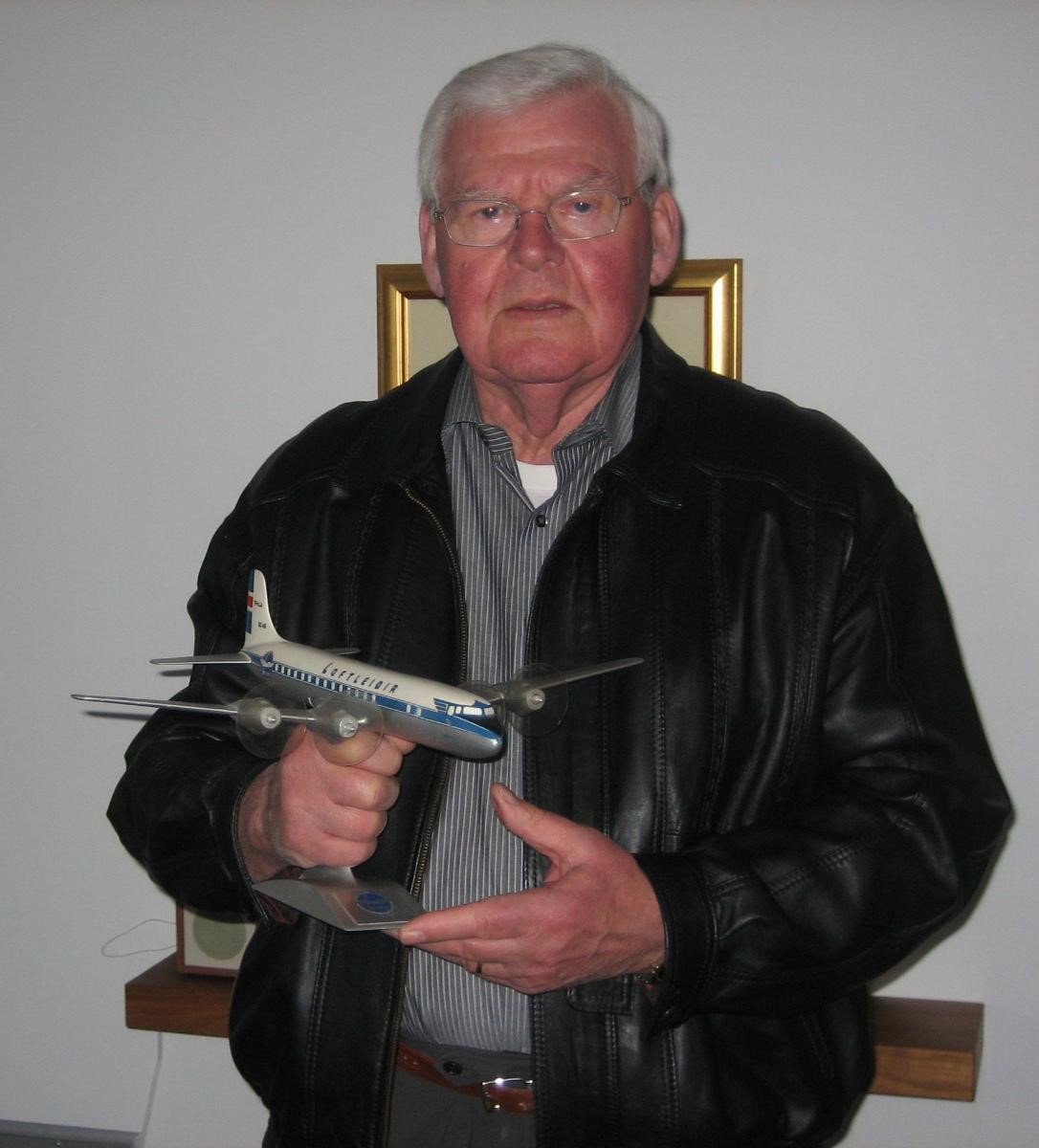 Only once did I leave the hanger to go to the main terminal. Two young American soldiers told me to put my hands up and lay on the ground which had a couple of inches of water. I told them to shoot me. I explained what I was doing, they eventually understood the problem.

I will never forget the scene in the terminal: screaming kids, crying mothers. It appeared the news was out that we crashed. In those days phoning was a major event.

I reported the aircraft serviceable at 6:00 hrs on the 6th September and had a lay down in a room for 4 ours. We departed Keflavik 11:30 for Gander. Tanked up the aircraft and took off for Idlewild (J.F. Kennedy Airport) and offloaded the passengers. We flew empty to Teteboro Airport where we had planned to change No. 4 engine.

The next shock was when I seen the engine. It was a Pratt & Whitney Bare, which is an astronomical amount of work to change all the QEC over, about 100 components and 300 bits and pieces. The crew was staying at the New Yorker Hotel in New York and I worked 12 hours a day for four days to complete and install the engine. We departed empty to Gander, completely tanked the aircraft and departed Gander to Shannon, refueled again and arrived in Hamburg 10:33 hrs the 12th September.

The Chief of Maintenance asked me how the aircraft was. I said it was fine, serviceable. He wanted me to go with the aircraft on an around-the-world-trip with the Philharmonic Orchestra of Edinburgh for 6 weeks. As I lost 4 kilos of weight and was completely knackered I said this is a No-Go.

Many moons past. I was Manager at Cargolux, I seen Gunnar Bjornsson walking down the corridor. He was the Technical Representative for Loftleidir, operating Douglas DC8-63. (Round-trip to New York about 12 hours) and I was Contracts Manager for Cargolux. 1979 – twenty years had gone by. We became good friends. Himself and Helga, his wife, visits Luxembourg now and then. Only “51 years have past.

Guenter Kurfiss another long-time friend sent me John Wayne’s movie, flying from Hawaii to San Francisco, you should get a copy.

I can say: the Gods were on our side or maybe he could not stand screaming kids and crying mothers up there.

Don’t ask me any questions and I’ll tell you no lies.