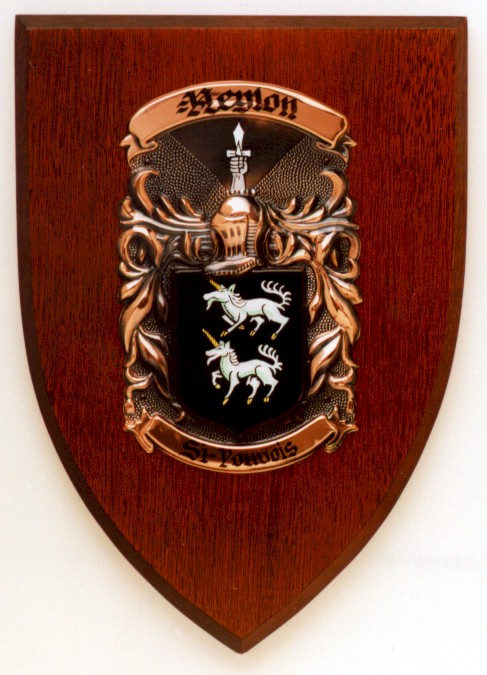 The description of the coat of arms is as follow:

Translation: The unicorn is a mythical creature who was prized for its Virtue and Strength

Translation: The dagger is the symbol of one who acts in defence of the Christian Faith

Reproduced on basis of information supplied by the Historical Research Center

The Irish surname Neylon is an Anglicisation of the Gaelic surname “O Niallain’, which meant ‘son of Neil/Nial”. “ain” in the Irish language means against. This surname originated in Thomond (country Clare) where the family were the original owners of Ballyally Castle.

In the Composition Book of Connacht, which was compiled in 1585, three people of this name are listed as persons of importance in county Clare. In 1659, the family was numerous in this area and was scarcely met with elsewhere. Even today, the family name is still chiefly found in the south of Galway, the areas of Connacht and Clare.

The Neylon’s are descendants of the O’Neills. O’Neill is probably the oldest hereditary surname in Europe (it meant: Ua Neill or “grandson of Niall”)

Myths and legends ~ one of the earliest O’Neill ancestors lived at the time of Moses, and this ancestor gave the name “Gael” to the Celtic peoples, who much later founded Ireland and were the backbone of Irish Monarchy for some 2000 years! Some of the O’Neills ancestors were in fact, both Irish and Scottisch Kings, monarchs, princes, lords and chiefs

Today the regular variances of the Neylon-surname are:

The names aboves have not been misspelled, there just happen to be a number of variances.