I returned from Biafra in 1968, exhausted after strenuous and exciting assignment.

Glad to be home, hoping to relax for a couple of weeks and figure out what to do next to support the family: Roswitha, Michael, Sheila and Kevin.

Roswitha gave me a slip of paper to call Dr. Trummer in Munich.

He owned a travel-agency Paneuropa. I phoned him. He explained, he wanted to start an airline, operating out of Düsseldorf.

Roswitha and I went to Munich. I accepted the position of Technical Manager.

Dr. Trummer and I signed an agreement. The company was first called PANAIR but the American company PAN AM had the rights on PANAIR DO BRASIL, so we called the company PANINTERNATIONAL.

We went to British Aircraft Corporation and signed up for two new BAC 1-11 Aircraft. In 1970 the company purchased two more.

1 st we went to Düsseldorf, wanting to rent an apartment with three bedrooms, but the rent was so high that we decided to purchase a house in Kaarst 20 km from Düsseldorf-airport.

I then had to write a manual for the Technical Operation; employed four British licensed and experienced technicians, as well as ten good technicians from around Germany. We rented a hangar from the airport-authorities.

We set up a Technical Department, bought a tow-truck, air-starter, engine-stands etc. While the operational side, pilots, cabin-staff etc. was taken care of by the Chief Pilot and Operations Manager.

All the operation being certified by the LBA – Luftfahrt-Bundesamt – before the 1 st aircraft flew.

The financing of those airplanes was paid by people paying their taxes into a company instead of the government.

Pan International were very lucky to be owned by a travel-agency so they had plenty to fly and the company decided to purchase two 707-120 aircraft to do the intercontinental flights from American Airlines.

They increased the pitch to carry the maximum amount of passengers, which were around 200. Roswitha and I flew to USA to sign all the papers with American Airlines. They gave us free tickets to fly to Hawaii. We stayed in their hotel on Waikiki Beach for free and enjoyed ourselves.

Life was good to us.

The maintenance and the operational side were running very smoothly until a BAC 1-11-500 Registration D-ALAR Flight 112 crashed in Hamburg/Hasloh , killing 22 people on the sixth of September 1971. The aircraft was supposed to fly to Malaga.

The crash was caused because fuel was filled into water-containers which were normally used to cool the engines to produce more power; instead they overheated and shut down.

There was no time to fly back to the airport Düsseldorf and the pilot Capt. Reinhold Hüls tried to land on the highway A7(also called European Route E45), came to a bridge, cut off the tail and cockpit. The fuselage rolled over, 99 passengers escaped unhurt. No one got hurt on the ground (highway)

It was quickly established what the cause was.

I called Dr. Trummer to tell him the bad news and then I had to call the criminal police. They immediately sent a team of six detectives to interrogate all the people involved.

Their Chief interrogated me, I sent him on a flight to get familiar with what happened in the situation.

The Co-pilot was a female when she was asked by the detective what she done when the engines shut down. Her reply was:

It was a pity you did not shut off the water-system.

Six of the staff was summoned to the court.

I was on the stand for 2 ½ Hours, but only as a witness. The six staff was trying their best to give me the blame for the accident.

I did not take a lawyer; even so I was advised to do so. I insisted in speaking English only and stated that all documents, manuals etc. were in English and I employed staff only which was fluent in the English language.

On cross-examining, I maintained it was a typical accident caused by humans and not technical 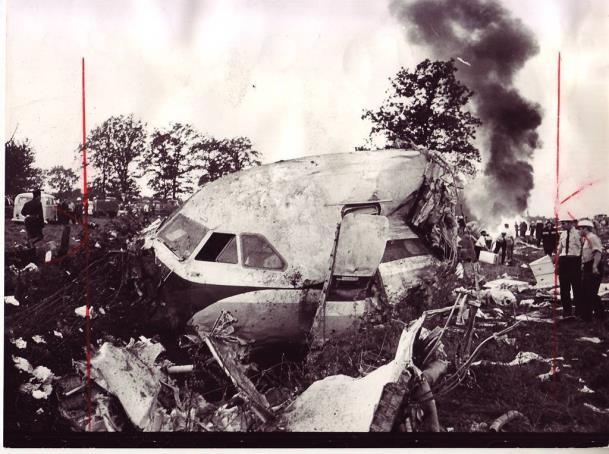 I stated that a big German company put the incorrect oil on 16 aircraft and they had to remove all the engines. I went on with similar accidents, but the judge stopped me, saying it had nothing to do with the present case. I replied, it would be necessary for him to be aware that over 90 % of aircraft-accidents were human-errors.

Due to the publicity and the change of tax-laws Paninternational had to declare bankruptcy, them owing me 50.000,- DM (Deutsche Mark) for salary, overtime etc.

When Roswitha and I were driving home, I overtook four cars in a forbidden area. The police flagged me down. I told them I was going to sell the car due to the bankruptcy, so I was not punished.

I had good contact to Loftleidir Icelandic Airlines, operating out of Luxembourg (which became Cargolux) and accepted an invitation for an interview. I got a job as Manager of Material, Control & Purchasing.